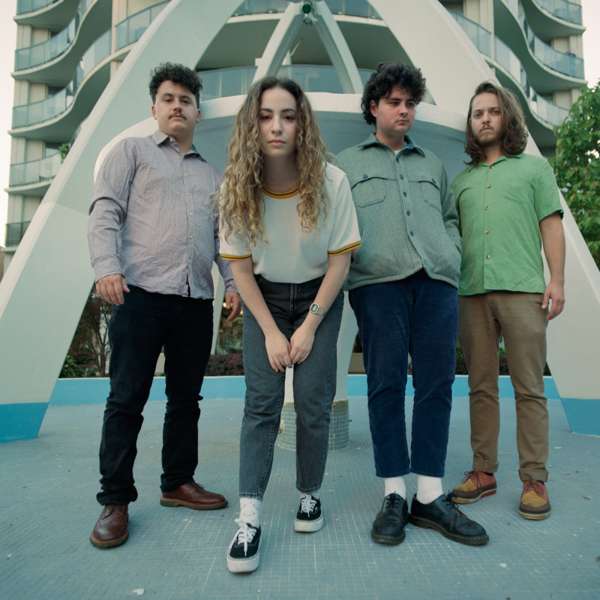 TALLIES navigate an unfamiliar world on their confident self-titled debut album, which blends elements of shoegaze, dream pop, and surf rock into a fresh sound that’s all their own. The band was founded by singer and rhythm guitarist Sarah Cogan and lead guitarist Dylan Frankland, a couple who met in a sound engineering class while attending Algonquin College. Tallies’ sound was fully realized with the addition of Frankland’s friend from childhood rock camp, drummer Cian O’Neill, and bassist Stephen Pitman. In a year since relocating to Toronto, the quartet have played shows with bands like Mudhoney, Hatchie, Sloan, and fellow Toronto band Weaves.

Sarah started music lessons at a young age, learning simple piano melodies and guitar chords that she could sing and write lyrics over. Frankland has also been immersed in music for most of his life, growing up with a music-obsessed father who introduced him to greats like The Smiths, The Sundays, Aztec Camera, and Cocteau Twins. He subconsciously carried these influences into Tallies, which is evident in the Johnny Marr stylings of his guitar riffs and the Robin Guthrie-tinged shoegaze textures of his production. “While writing this album, we were listening to The Sundays Reading, Writing and Arithmetic a lot,” says Frankland, adding, “Harriet Wheeler’s soft-spokenly sweet melodies has a major influence on where Sarah sometimes takes her writing to.”

Despite lyrics that confront the anxieties and uncertainties of growing up, DIY Mag noted their style is more carefree, calling it “woozy, surf-pop nodding gold that wouldn’t sound out of place blaring out of a busted cadillac cruising past Venice Beach.” Opening track “Trouble” is a song about naivety and being unable to foresee potential forthcoming danger. “This innocence, for women especially, is impossible to maintain as you grow older,” notes Cogan. On their infectious and charging lead single “Beat The Heart,” Cogan laments “the lack of empathy that exists so strongly today.” “Mother” touches on the transition from an adolescent, dependent relationship with your parents to a mature, independent one. Cogan questions what parental advice to take and what to leave behind, knowing she’ll learn from it either way (“My mother taught me to ask questions / She said that boyfriend will not do / I talked yet still I never listened / Somehow she always still rings true”). Album closer “Easy Enough” meditates on the lasting impact we have on each other and a realization of “how difficult it is to move past changing relationships,” Cogan says, while “Giving Up” addresses environmental concerns, namely global warming.

The album was co-produced by Frankland and Josh Korody at Toronto’s Candle Recordings, a hot spot where locals like Metz, Dilly Dally, Austra, and Weaves have made indie classics. It’s also where Frankland works as an engineer/producer. With upbeat percussion, melodic bass riffs, and magnetic guitar leads, Tallies puts one-of-a-kind melodies to the universal impact of adulthood hitting you square in the face. It’s the band’s soundtrack for adjustment and their outlet for making sense of the lessons they’ve learned throughout a year of change: “This year was very eye opening to how some people have made me feel new and uneasy emotions, and others have been so generous with kindness,” says Cogan. “I find it so interesting how people are so individual and different when we’re all built the same. I’ve grown from these interactions by recognizing them more and more everyday — Learning how to adapt and understand what people’s intentions really are and what my sensitive mind is contorting.”

“Tallies was written over the course of 2018. It was a year filled with on-going changes and the adaptation of adult life. This album embarks on a year of growing and the feelings left behind when everything around you is shifting.” – Sarah Cogan of Tallies

“this quartet hit a melancholy sweet spot between The Sundays, Sarah Records and Slowdive” – Q

“Chuck in a dollop of shoegaze and dream-pop, and a smidgeon of surf pop, and you’ve got a rather lovely complete package.” – CRACK

“Dreamy guitar pop with that Canadian sensibility, with influences ranging from The Pastels to The Sundays, Orange Juice, and The Pains Of Being Pure At Heart.” – CLASH

“Working together like a team of gifted archeologists, the band have created the best kind of backward-looking album. It doesn’t just repeat the past, it mines it for gold while tossing out the dross, a process that works to refine this record until it gleams like a precious gem.” – ALLMUSIC

“Sounding fresh and exciting whilst fully highlighting not only Cogan and Frankland’s insatiable knack for crafting timeless melodies, but also the taut rhythm section of bass player Stephen Pitman and drummer Cian O’Neill underpinning their every move… It’s also a glorious entrée of sorts to what promises to be a glittering career for its creators.” – 8.5/10 UNDER THE RADAR