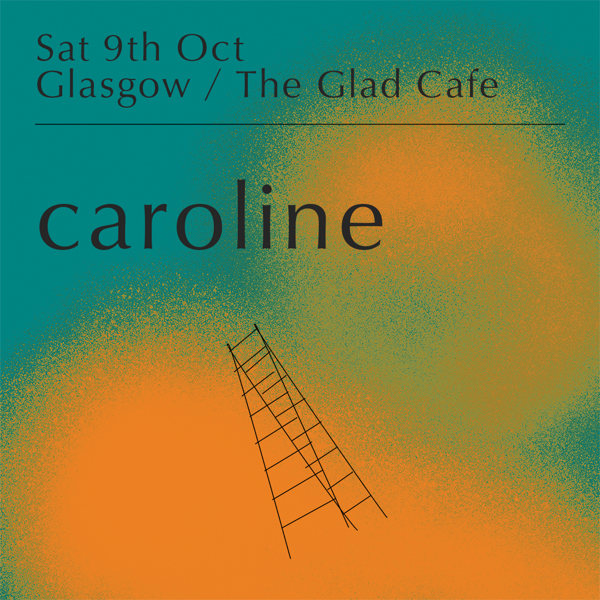 caroline began in early 2017, evolving out of weekly improvisation sessions. Band members brought together their shared influences, including Midwestern emo, Appalachian folk, minimalist classical and various forms of electronic music, slowly expanding their on-stage membership as the songs developed. Rough Trade released their debut single “Dark blue” in March 2020, and the eight-piece were nominated as Ones To Watch at the 2020 AIM Awards, and narrowly beaten by Arlo Parks.

“Skydiving onto the library roof” represents a new development in caroline’s songwriting process. Built on what the band refer to as a “broken loop” with no fixed pulse or rhythm, the song represents the start of their ongoing explorations into non-gridded time signatures and improvisation. “We’ve always been interested in patterns and repetition and that definitely features in a big way, although rather than there being a minimalistic, mechanical precision to the repetition, each one is unique,” they explain of the track. “The essence of the song - the broken loop - came early in the process and everything else seemed to naturally evolve out of it, as if the other parts were already contained within the broken loop and just needed to be unpacked.”

The video for “Skydiving onto the library roof” features people wading in the River Ravensbourne, in southeast London, an activity that the members of caroline say their wider group of friends have got into over the past year, allowing them to explore the city from a different perspective. The video itself was inspired by semi-documentary styles of film such as Patrick Keiller’s “London”, which explore the boundary between artificial and natural behaviors. “We became interested in giving poignancy to incidental occurrences and chance goings-on. The video ends up kind of being a ‘film about a film’, or a ‘behind the scenes’ documentary at points,” the members of caroline explain. “The video is a collection of events, not necessarily connected - kind of like the music, there isn’t a narrative, just a progression of scenes that make sense when placed in a certain order."

Dr Diljeet Kaur Bhachu is a Glasgow-based musician, poet and activist. Diljeet plays with flutes, spoken word and electronics, making ambient, experimental, looping sounds that draw on a range of influences including her classical and jazz training, her love of pop music, and her Sikh-Panjabi heritage. Diljeet was a participant in the 2021 BBC Words First Spoken Word development scheme, and has had her poetry published in The Colour of Madness, a Black and Minority Ethnic mental health anthology.

https://diljeetbhachu.com/2020/06/30/collabs-and-features/ - some collabs with poets, and featured track with Kapil Seshasayee