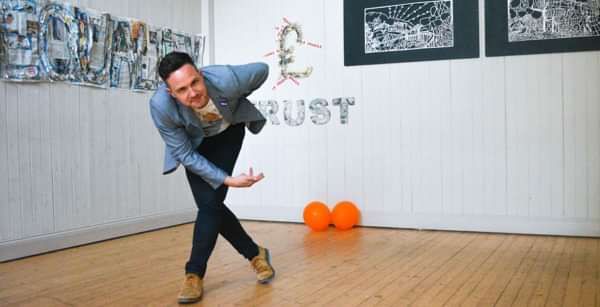 SOLD OUT
Entry Requirements: Over 18s only

This play was first performed at the National Library of Scotland in August 2012. Directed by Sacha Kyle.

‘Bissett is a terrific performer, capable of terrifying, high-speed transitions..[has] wit, sharp political intelligence, and an ability to entertain his growing army of fans.’ – Joyce McMillan, The Scotsman

**** 4 Stars ‘Who knew it could be so enjoyable to spend an evening trapped in a room with a gang of man-sized spiders? A real Fringe gem.’ Alice Jones, The Independent

***** 5 stars ‘Long awaited, after the smash-hit success of The Moira Monologues, Alan Bissett’s new drama, is an equally hilarious series of monologues all played by Bissett himself, but this time with a political edge.’ The Skinny

***** 5 Stars ‘As in the critically lauded Moira Monologues, Bissett’s a joy to watch as a solo actor, skilfully giving life to each character through versatility of voice and mannerisms.’ Edinburgh Fest Magazine

***** 5 Stars ‘Excellently written and performed, this is definitely a work that holds you in its web — and a worthy successor to Bissett’s previous hit, The Moira Monologues’ Broadway Baby

**** 4 Stars ‘Unique, intelligent, funny and inventive piece of adult theatre… Bissett has become a spiderman (and woman) that may not swing from high buildings with his web but who spins a rare tale and knocks Peter Parker in to a wee tin hat.’ The Edinburgh Guide