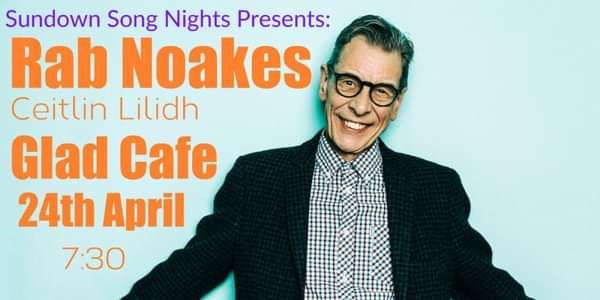 Sundown Song Nights is a new series of gigs that explores how broad the term 'folk song' can be. It returns this month with an incredible and contrasting line up of mighty solo singers in the beautifully intimate Glad Cafe.

Rab Noakes 2019 sees Rab Noakes’s lifetime in music’n’song flourish as he continues to tour and record. This year he has embarked on a 5-year expedition titled ‘Distance No Object’. In 2018 he marked 50 years of professional performance and released an album, the celebratory ‘Welcome to Anniversaryville’. In recent years he has been receiving awards such as a Nordoff-Robbins Tartan Clef for Contribution to Music and a Hands up for Trad award for Services to Performance. This year he is delighted to have been included in the Fife Free Press 40 Fifers of 2018. Recent highlights in his professional life include the production of high-profile commemorative concerts for long-time friends Gerry Rafferty and Michael Marra. Most of 2019’s shows will be in collaboration, in a number of duo outings. The collaborators include Rod Clements, Barbara Dickson, Jill Jackson, Kathleen MacInnes, Allan Taylor and Brooks Williams.

Here, at The Glad Cafe, Rab will be performing solo.

Ceitlin Lilidh As a graduate of the Royal Conservatoire of Scotland, winner of the Traditional Gold Medal at the Royal National Mòd and with a Danny Kyle award under her belt, Ceitlin Lilidh has a wealth of experience performing all over the world as an ambassador to Gaelic song. She has performed nationally and internationally at renowned festivals including Celtic Colours, Festival Interceltique de Lorient, Milwaukee Irish Fest and Celtic Connections. As well as establishing a solo career, Ceitlin is a TV presenter for BBC ALBA and part of up-and-coming band SIAN. Ceitlin will be accompanied by the mighty John Lowrie!