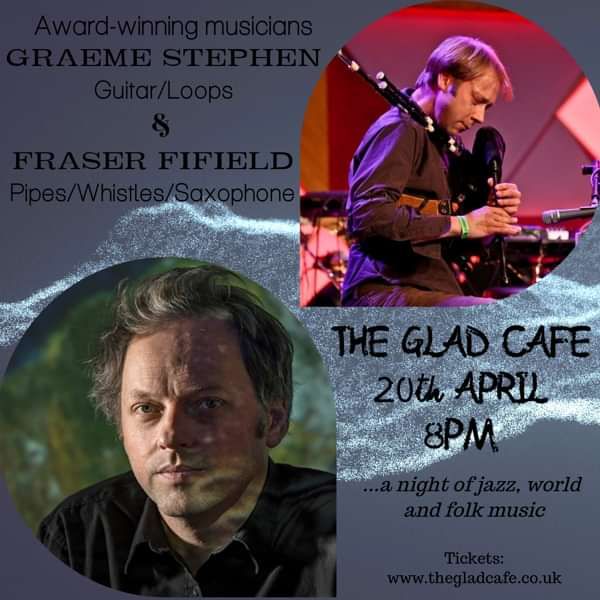 Celebrating 20 years of their critically acclaimed musical partnership, Fraser Fifield (Ignition Trad Award 2015) and Graeme Stephen (Innovation Award 2013 & Instrumentalist of the Year 2011) blend a worldwide range of musical influences through a perfectly natural Scottish cultural filter. Graeme has been composing and performing extensively for a range of classic silent films, while Fraser has been on inspiring recording trips to Mumbai, Buenos Aires and also gigging with Scottish folk legends, Capercaillie. It's set to be a perfect mix from two of Scotland's most respected musicians.

Guitarist Graeme Stephen provides the perfect foil for Fifield's pipes, saxophone, whistle, kaval, cajon, electronics and compositions. Together they make a truly original sound, rooted in the Scottish folk tradition but exploratory by nature, which has consistently drawn critical acclaim.

"Fraser Fifield and Graeme Stephen's set travelled from the Celtic countries, with Fifield's super-fluent and expressive low whistle playing borne on Stephen's keenly inventive guitar rhythms, to suggestions of the cafes of Andalusia and gypsy weddings of eastern Europe and back via ruggedly riffing pipes and guitar, all the while retaining the spontaneity of the jazz ethos" - Rob Adams, THE HERALD"