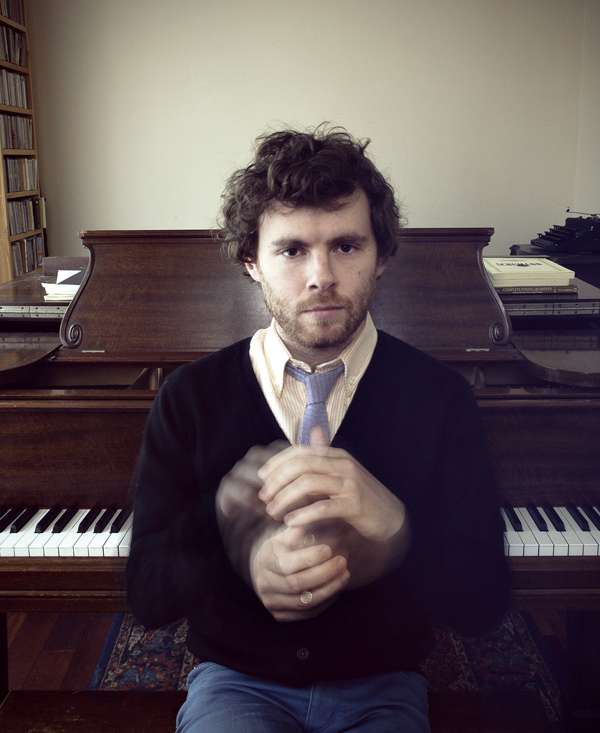 12.00 in advance
Entry Requirements: Over 18s only
Buy Tickets

The first requisites for the enjoyment of a tour in the United States are an absence of prejudice and a willingness to accommodate oneself to the customs of the country. If the traveller exercisea little patience, he will often find that ways which strike him as unreasonable or even disagreeable are more suitable to the environment than those of his own home would be. He should from the outset reconcile himself to the absence of deference or servility on the part of those he considers his social inferiors; but if ready himself to be courteous on a footing of equality he will seldom meet any real impoliteness.—Baedeker’s United States, fourth revised edition (1909)

Gabriel Kahane’s copy of Baedeker’s United States arrived in October of 2016. The vintage guide was meant to be a cheerfully arch traveling companion, a time-displaced Virgil accompanying Kahane on a nearly 9,000-mile train trip across the country. The journey itself was supposed to be a coda, not a prelude. “I thought I was going to do this much more sort of historically-minded inquiry into the nature of travel and the history of travel,”Kahane says. Impressions from the trip would embroider the project, stitching it together. And then, a month later, and a day before Kahane was scheduled to embark, there was an election in the United States, and everything changed.

In “Baedeker,”the fourth track on Kahane’s album Book of Travelers, his guidebook meets its subject in the form of theview from a sleeping car on the Empire Builder, Amtrak’s Chicago-to-Seattle route. Over propulsive, nervous, four-over-three rhythms, the book’s comfortably categorized cartographic certainty—”red line for railroad, black line for river”—gives way to hills and sky, sensations of expanse and unfamiliarity. “Learn to be lost now,”Kahane sings, “learn to be shattered.”

Book of Travelers took time to come together. For months after his rail journey, Kahane “felt pretty paralyzed.”He began work with producer Blake Mills upon his return, but, upon hearing the “twenty or so”songs that had been written prior to the trip, Mills told Kahane, “I don’t think you have a record yet.”The journey was the thing, Kahane realized: “the kind ofhuman interaction that took place on this trip.”Kahane has always been a songwriter fascinated with place. His 2012 musical February House recreated the unlikely jostle of its titular Brooklyn abode, home to an astonishing cross-section of 1940s artistic luminaries.

The Ambassador surveyed a collection of Los Angeles addresses, listening for ghosts both comic and tragic.Even the oblique, post-9/11 unease of his song cycle The Fiction Issueemerged from glimpses of specific, contingent locales: a flower shop in the Bronx, a polka-soundtracked beer garden in the midwest. Kahane’s settings are particular and passing. “We moved around a lot when I was a kid,”Kahane explains, “and so perhaps I was more aware of a kind of ephemerality of how we think of home.

”Book of Travelers reconciles that devotion to pinning down places with the American tradition of hitting the road by its choice of conveyance: a train, a room on wheels, a fixed, peculiar site nonetheless in constant motion across the landscape. His ephemeral home became the dining car, where the dice-roll of mealtime seating made for offhand common ground, breaking bread with strangers on equal terms, every traveler both suspicious and curious, both trapped and liberated.It was a way to connect, however tentatively, threads that had become frayed and broken.

“This piece grew out of a certain set of sudden impulses having todo with the fracturing of the body politic,”Kahane says, “or maybe, I should say, the un-bandaging of a fractured body politic that has always been in some sense fragmented.”The historical impulse remains, especially when Kahane reaches into his own family history, singing of those of his ancestors who escaped the Holocaust—and those who didn’t. But even that circles back to the slipperiness of home: where and whether one belongs. Book of Travelers captures those moments when a search for a place to callhome becomes a collective anxiety.

Kahane addresses the listener at the start, explicitly picking up where The Ambassadorleft off; but, for much of the album, he becomes the soundboard. The bulk of thesongs embody those dining-car voices, strangers’accounts, fleeting confidences. The stories are stories of families, literal and figurative: the who and the how of our attempts to find a place in the world. But the crackle of the songs lies in the space between easy pablums of universality and the harder work of actual connection. “Empathy is so much the currency of what we do,”Kahane says, but “part of empathy is being sensitive, and in some cases that empathy will lead us to the conclusion that some story is not ours to be told.”He “wrestled for months and months”with “What if I Told You,”the testimony of a well-off African-American woman from the north, stuck on the train because her children were uneasy with her driving to a funeral in Mississippi. In its final form, the song aspires to the harsh clarity of documentary: over sharply decorous arpeggios, classically-restrained but restive and unresolved, the woman’s calm and pointed survey of the country’s persistent racial animus troubles the waters of the whole piece, her skepticism locating Kahane within his own project as just another traveler, as found and as lost as the rest.

The album underlines that centered, yearning loneliness with its voice-and-piano sparseness. The earliest studio sessions for the songs worked with larger palettes of band and production; again, it was Mills who pushed Kahane to the realization that the intimacy of a single performer was appropriate; the recorded version was ultimately realized with the help of Mills’mentor (and industry veteran) Tony Berg. “I think that there can be an earnestness in me that I sometimes run away from,”Kahane admits. “Reducing it to voice and piano was really being about as vulnerable as possible.”The decision also brought to the fore the importance of what Kahane calls the “monasticism”of the trip—as the song “8980”puts it, the leaving of “a cell phone for a suitcase,” a deliberate unplugging from the always-on, always-mediated flow of information.

“A lot of these connections that I made on the train are connections that couldn’t be made in our digital space,”Kahane says. “And so I think that the kind of anachronism of piano-and-voice is maybe a kind of clumsily literal analogue—no pun intended—to the rejection of the digital.”

The album Book of Travelers differs from the theater piece 8980: Book of Travelers, which debuted in November of 2017; in the latter, video and lighting emulated the passing landscape while Kahane filled out the narrative of his journey with further songs and dialogue. Perhaps to counterbalance a recording’s illusion of permanence, the album follows its own, more fragmentary logic, snapshots and souvenirs rather than the full time-stream of travel. Some of what anchored the theatrical version—in particular, Kahane’s brief welcome into a circle of Old Order German Baptist Brethren to sing hymns—become fugitive memories. Still, every worthwhile trip turns fugitive and fragmented, the desire for a direct experience somehow filled by isolated impressions and passing epiphanies. Delays and difficulties are part and parcel of any odyssey; and it is in that waiting that the real stories sometimes occur.

In an electronically-networked world, the enforced patience of train travel can reveal the narrative. “In that inefficiency,” Kahane says, “is the space to reconnect on a human level.”I just want to talk to you.